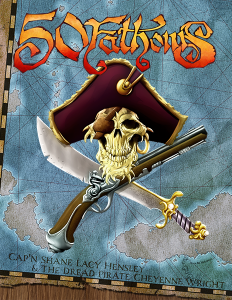 Well much to my surprise Apprentices Red and Blaster came up to me over the weekend and asked if we could play "that pirate game".

"The Pathfinder thing?" I asked.

"No that other one" which caused me to roll my chair back start pulling out books - because I can do that now : ) 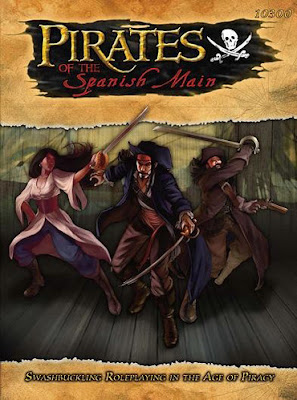 "Yeah that one, and that other one you were going to use because this one doesn't have any magic." 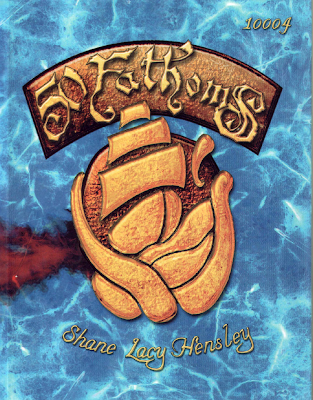 Alright, let's see if I can find my notes - flip flip flip - Deadlands, my Necessary Evil campaign from 2010, character sheets for 4 or 5 flavors of SW, nope, nothing. I'd like to blame it on the move but my Savage Stuff was all in about 3 binders and I see no sign of it. I remember thinking that I would have them make PotSM characters (since it has all of the rules in one book anyway) and then I was going to transport them to the world of 50 Fathoms which is much more fantastic and probably more to their liking. Alright, I can wing that.

So a few minutes later we're working on characters - Red still had his character from this episode so he decided that he was going to be the captain and that Blaster's character could be the first mate. I gave them a two-master as their starting ship, assigned generic "pirate" stats to the crew and set up the starting situation.

They were somewhat new to pirating on their own. Blaster had been found at sea years before after his merchant father was killed and his ship sunk by a pirate. The ship that found him was Red's father's where Red was serving as well. They decided that Red's character's father had been a successful pirate and Blaster had joined up as he had no place else to go. Eventually Red's father had been killed by a rival pirate captain - the same on who had killed Blaster's father all those years ago. Now they had used some hidden treasure to outfit a ship of their own and hoped to eventually seek revenge. I thought this was a pretty good story and gave them some extra money and a few XP's for it.

I don't like the assumed starting point of 50 Fathoms - about the only thing I don't like about it - so I had them starting in the "real world" (sorta) of PotSM headed back to port. This grounds them in this  world and gives them a place to return to when the 50F finale is over if they choose to do so. The racial notes for human characters in 50F contains a decent description of what humans experienced when they were transported to the campaign setting (humans are not native to the world but there are a bunch of them there now - there's some magic afoot) so I used that to describe what was happening and to jump right to the good part they ended up trapped in a sargasso mess with debris and bodies in the water at night with a storm approaching, and with zombies climbing up the sides of their ship. Cards, dice, and poker chips heat as we refresh ourselves on how combat works. 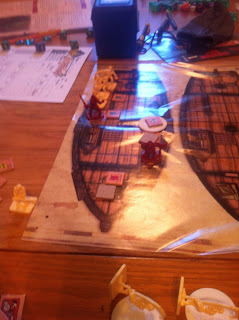 Those are Heroquest mini's on a ship map from the D&D 3E Savage Tide adventure path with counters from the old Yaquinto game Swashbuckler standing in for the crew. That's about a 25 year span of gaming materials but hey, it was close by and guess what type of miniatures I DON'T have? That's right, pirates. Great.

So they fought off the zombies (without losing a single crewman!) and decided they needed to take to the lifeboats and head for port to get some help pulling their ship out of the entangling seaweed. Of course, as the sun comes and they sight land they realize that port should be over here and instead they see land over there, which means they must be seriously off course. They have no idea ...

DM Notes: What the heck was I thinking agreeing to run a miniature-friendly game that I have no miniatures for? There are some figure flats available for it so I'm probably going to go with a paper mini option for the first time ever, just for this campaign.

Also, typically I at least skim a campaign book before I try to run something in a published setting. No chance of that here as I had not looked at either book since that discussion last year. Given their level of interest though I couldn't say no and I have been wanting to run this system again - I just thought it would be Deadlands! I have a few days before we will play again so I should have time to read through the starting situation and read back through the high points.

Despite this we all had fun with it and they want to play it again next weekend so stay tuned.
Posted by Blacksteel at 12:00 PM