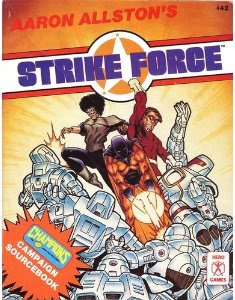 Among the recent acquisitions is one of the most highly regarded of the early Champions books: Aaron Allston's Strike Force. If you've been around Champions for very long then you've probably heard it mentioned with some fondness/reverence. I have been hearing about it since it was published in 1988 but I've never laid hands on a copy of it until now. I know for at least part of that time I thought it was a 3rd party book like those AutoAdventures for Car Wars. The late 3rd Edition stuff for Champions in the late 80's was a big blind spot for me as I had the 2E stuff and used it until the Big Blue 4th Edition came out and fired things up again.  I eventually started working through this blind spot and after hearing it discussed again recently on an episode of the Vigilance Press podcast I decided it was high time I owned this legendary supplement.

After acquiring it and reading it I will say that it is one of the most useful books I have seen, for Champions especially and for people-who-run-RPG-campaigns in general, particularly Supers campaigns. There is a lot of discussion of the practical elements of actually running a campaign - not so much about designing plots and villains but about keeping players happy, pacing a campaign, and some ideas like "blue-booking" which deal with the practice of running a campaign - not the theory.

Besides the advice sections this also effectively a sourcebook on one man's superhero campaign run over a period of about 7 years. He talks about how the first few sessions went, talks about the types of players, which characters they created and ran, provides a history of the campaign world, includes Champions character data for most of the heroes, the major villains, the bases, and the vehicles used in the game, plus maps of the major hero bases and notes on the organizations and other hero groups around the world. The fact that most of it developed in play makes it a little more complex and a little more messy than a setting created out of nothing for a game system, but it also reads much more like a history of the X-Men or the Avengers from a comic book. Crazy things happen and relationships get complicated and viewed as a whole some of it looks a little strange but I'm betting at the time these guys were having a blast.

I'm pretty sure some of the advice sections made it into later Champions material, but taken as a whole this is a very solid work and I think it holds up well today. I think a lot of DM's Guide type books nowadays are plagued with lengthy, wordy advice sections that go on and on but say very little that's truly useful ("you need a table and some friends and some snacks" - really?). This book is all about the practical and is much more useful as a result, even for someone who's been at it as long as I have. If you're interested, it's worth a little time and effort to track it down.

My friend Will, Champions Guru and all around greatest Supers GM I have ever met, had a copy of this book as he did every Champions product up to and including 4th Edition.

I never got to read it myself but I have heard many sing its praises over the years.

Sigh. One more item to add to my list of Questing Beasts to be hunted.

I'd like to hear more about Strike Force. I was lucky in that I bought it shortly after it came out, so it probably shaped how I GM today. Well, it definitely did.

It's hard for me to see the influence because it's been so long--so I'm interested in hearing more of your thoughts so I can fathom the influence it's had on me!

I am a true-blue Genre Fiend. Without Allston, I'd never have a proper diagnosis for my condition!