I worked through Iron Man year one a while back and figured it was high time we got to year two! We begin with ToS 51: 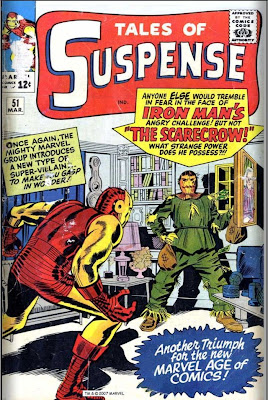 So this Scarecrow is a stage performer, a contortionist, who has some trained crows. He decides to start committing crimes after helping Iron Man stop a robbery - I don't think that's how it's supposed to work! He ends up stealing some of Stark's plans and tries to sell them to the Cubans. 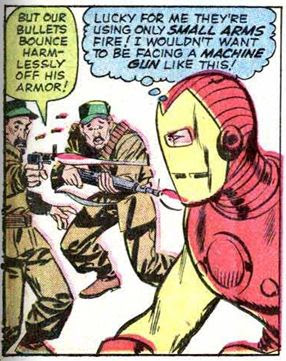 Iron Man intervenes and saves the day, punching them all senseless and then sinking the gunboat where the meet was happening. It is interesting that he's concerned here about facing bigger guns than small arms. The armor is clearly not solving all of his problems yet. Also, in this issue we see nothing about him running out of power - he seems to have that one figured out now and thank goodness for that.

Things you could steal: Well, I'd probably have the crows as a visible, physically present telekinesis power. Also, if you play D&D, here's an example of the creative use of "unseen servant" or "mage hand". Cubans as bad guys is also entirely appropriate for a 60's adventure. 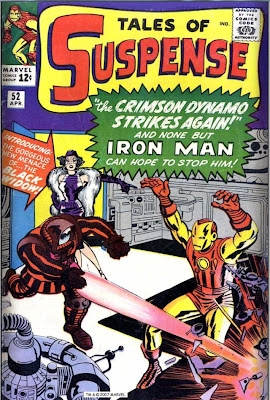 Here we have the return of the Crimson Dynamo AND the first appearance of the Black Widow! The Russians are still smarting from the defection of the original Dynamo so they send a male agent named Boris and Natasha Romanov the Black Widow - see what they did there? - to get revenge against Stark, Professor Vanko the defector, and Iron Man.


Boris subdues Vanko and steals the Crimson Dynamo suit while Natasha distracts Stark in the most effective way. This second Crimson Dynamo defeats Iron Man and captures him by draining his electrical power, which at least makes sense and is something we haven't seen for a while. Iron Man recovers, escapes, and has a knock-down drag-out fight with Boris the Dynamo. In the end Vanko sacrifices himself to destroy Boris and the Widow escapes in the confusion.

Things you could steal: There are a lot of classics here - stealing someone else's power armor, the beautiful distraction, Russians, the self-sacrificing scientist, and a good solid rematch fight to wrap up. In this one the Widow is a complete non-combatant and not some super-martial artist - a good reminder that combat prowess is not the only way to contribute to a super-story. 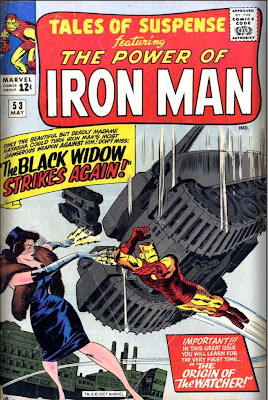 This time Tony invents an anti-gravity ray and the Widow comes to take it to find redemption at home. We get to see an angry Senator scolding Stark for the first time - but not the last! Things eventually work out and Iron Man stops the communist plot. We're also back to some power concerns again, even with the new suit. Also, once again, the Widow escapes.

Things you could steal: There's not much new here, although the one-off unrepeatable gadget can be fun if used very sparingly. The redemption angle also makes it easy to explain a return appearance.


Stark redesigns his helmet then gets called to Washington and sent off to Vietnam to check out problems with some of his missiles. This leads him to a second encounter with the Mandarin and a pretty one-sided fight follows. I did like that the Mandarin shows a growing respect for IM during the fight - it's a cut above the more typical criminal/communist opponent we have seen before. This is the first cliffhanger storyline as the issue ends with Iron Man out of power (Yep) and trapped in the Mandarin's lair. Also, we have another first appearance:

I've always loved that amongst the many super gadgets in the super hi-tech armor Tony Stark has roller skates! He's also removed the pointy-topped faceplate for a more integrated-looking one and we are almost to the classic Golden Avenger armor from the 70's & 80's.

Also in this issue: the origin of the Watcher, if anyone is interested. 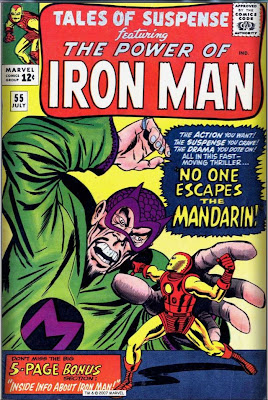 Our story begins with IM captured but we learn that he now has a built-in generator which can "recharge his transistors" given a little time. This time we have a much more even fight and IM recovers his missiles, defeats the Mandarin for the most part, and leaves with his dignity intact. We also get our first all about Iron Man section of how the armor works and what kind of gadgets he has in it.

Stuff you can steal: Take a tough villain, put him in his home base, then give your heroes a reason to go there - then make them glad they got out alive. Also, unexplainable powers - why rings? How do they do what they do? No explanation is sought or given. 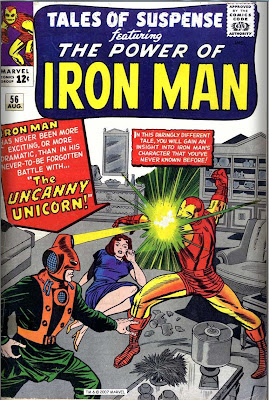 To start this one off Stark cops an attitude, smashes a bunch of stuff while feeling sorry for himself, treats Pepper and Happy poorly, blows off the Avengers, and heads out for a date. Meanwhile a new villain attacks one of his factories, using the "irresistible power" of his unicorn horn to "sabotage America's military production" - oh my. He's also looking to fight Iron Man so he trashes the place, beats Happy senseless and kidnaps Pepper. The horn appears to be a multipower/array that can perform ranged blasts, magnetically move objects, and form a shield around him as a strong defense. He and Shellhead tussle for a while while Stark feels guilty for getting Happy put in the hospital. At the end the Unicorn appears to have won but Iron Man manages to pull an upset and the Unicorn slinks away to possibly return again.

Stuff to steal: The "Uncanny Unicorn" is from behind the iron curtain and the original Crimson Dynamo scientist helped design his suit, so we have a connection to a previous enemy with the ongoing theme of "communists everywhere hate Tony Stark". That's a useable idea in a campaign. Also the Unicorn is goofy enough I may have to have him show up in a game of my own, perhaps after being frozen or something for 50 years.

That's all for the first half of Year 2 - more next time!
Posted by Blacksteel at 12:00 PM