While researching for my latest mania I realized that I ran and odd kind of sandbox back in the 90's for Rifts of all things. I think Rifts might be a decent game for this kind of approach, better than I had thought at first anyway. 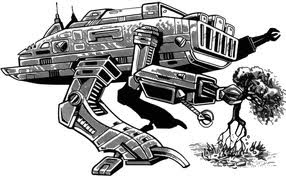 The concept for the campaign was that the PC's all started out in one of those quasi-coalition towns in Post-Rift Arkansas. A local mage was recruiting for an expedition to Detroit, where he was convinced that he would find some ancient magic items in the collection of a wealthy collector from the time before. The plan was to travel cross-country in a Behemoth Explorer robot (pictured above) with a crew of adventuring types, explore things along the way (and sell that information later) and then dig into the ruins of Detroit.

I gathered some real world atlas pages of the travel route, slipped them into sheet protectors, and marked them up for apocalyptic damage, rifts and ley lines, and interesting locals. I knew the course the 'bot would travel, so I stayed within 100 miles or so of that course for any kind of detail and made some notes on what else might be off the edges.

The beauty of this approach is that the trip was going to take a few months to get there and presumably that much to get back so you get many sessions of sandbox exploration -with a moving map- but there is an overarching goal at the end for players who need a plot to work off of.

The giant robot follows all the rules of a typical West Marches/Sandbox Town - it's safe and nothing really happens inside it as that's where you go to heal/repair/learn new spells/accuse each other of being idiots. The interesting twist (other than having a base that moves) is that it can be attacked! Especially if the players start some kind of trouble and lead their enemies back to it, which happened once and spurred one of the biggest fights of the campaign, leaving the bot mobile but pretty heavily damaged. They learned form their actions, but they did enjoy getting to unleash some of the big guns and bigger missiles on the thing, so secretly I don't think they regretted it.

Managing players was easy enough - somebody can't make it? They're sleeping on the bot. New character? They are passing through the same area / a local / running from the law/ suffering a mechanical breakdown and agree to help out on the expedition. There was payment up front and at the end of the mission as this was a job, but money in Rifts isn't always a huge motivator, but XP's and knowledge, gear, and interesting types of ammunition (nuclear weapons) can be. 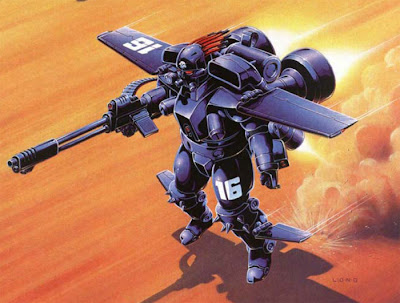 It was an interesting array of characters like the crazy who was severely claustrophobic so she slept in a tent bolted down to the top of the robot and the glitter boy who liked to drive his own truck alongside the bot (with his suit in the back). Along the way they fought demons, raiders, giant robots, vampires, superheroes, renegade wizards, and in a gladitorial arena somewhere in what used to be Tennessee. 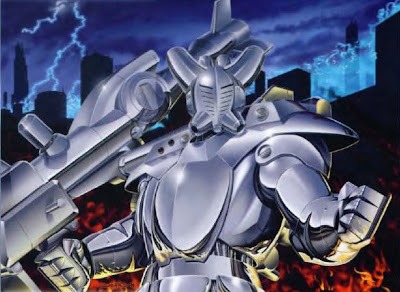 We did eventually make it to Detroit (and among other things they nuked Windsor - sorry, but they had a good reason) but the game fell apart before we could make the trip back.

Looking back I think this kind of game works pretty well with Rifts because the power levels are all over the place and while rapid ground and air travel is easily arranged, enemies have all of those options too. Limiting things to a set region might work too but the moving base opens up more and keeps them from mapping everything from the air on Day 1. 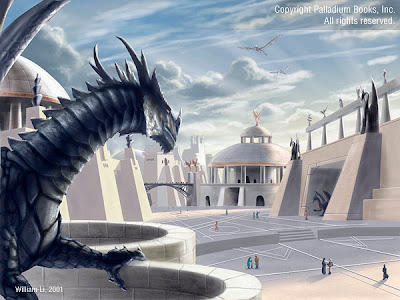 One thing with running Rifts of any kind is forget about balance - it doesn't really matter. In a sandbox game the less powerful characters can actually shine as the Wilderness Scouts and Rogue Scientists have an environment where their abilities are extremely useful. That said, having a giant cannon with a range over a mile and a swarm of missile with double that range ready to go is still very comforting. In fact it gives your weapon-heads plenty of room (and likely plenty of reason) to cut loose. Yes the system can be a mess but once you stop trying to fix it things get easier to live with and the DM and the players can have a lot of fun.
Posted by Blacksteel at 12:00 PM

I've never run RIFTs as an exploration game before..... you've given me real food for thought here.

Well that's good enough for me. For all the high tech and magic Rifts is still a post-apocalyptic world with lots of lost knowledge. For the people who travel by air or teleport this may not mean much but not everyone gets to go that route.