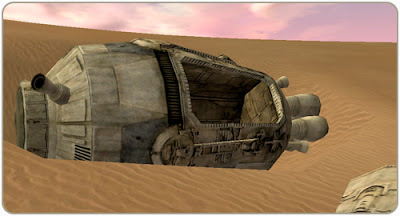 The extended holiday weekend was a good one with much family time, football, Apprentice Twilight's birthday, and general goodness. The long-awaited return of our X-Box 360 from the grave cut into some of the home game time but I still managed to work in two sessions with the Apprentices, the first of which was the resurrection of our Star Wars Saga campaign. Binder still on shelf, notes still on computer, ideas still in head ... DING! It was the one game that Red, Blaster, and Who could all agree on so that's what we played first. The outline for it is detailed here but in short it's a conversion of the old Star Frontiers Volturnis campaign to the Saga version of Star Wars. We got off to a strong start earlier this year and we all had a good time but it was bumped back several times in favor of more D&D and then stopped coming up in conversation. Things are better now.

When we last left off, the PC's (two Jedi padawans and a rodian scoundrel) had fought some space pirates in the corridors of their ship, discovered it was damaged beyond repair, made it to an escape pod, and crashed on an unfamiliar planet. That was Chapter One as outlined in my Campaign ... Outline.

Chapter Two begins with the stranded heroes picking up their packs and getting their bearings. With the 3 salvaged survival packs in the pod they figured they had about 4 days worth of food and water, more if they stretched it. Surveying the land around the mfrom atop the rocky outcrop they had smashed into, they saw desert, lots and lots of Tatooine-esque desert, with some mountains in the distance. They also spied a small dome-like mound a few klicks from their rock, so they decided to head their first.

At the mound they find that it is hollow and entered via a small opening. Inside is a well. There's not much room but they can all 3 fit inside so they take shelter from the sun and Apprentice Blaster's Kel Dor Jedi decides to sample the water. Blowing his Survivial skill check, he decides that any well someone would protect must be good and takes a nice big drink of it. Aprentice Red's Human Jedi does somewhat better with his Survival check and remembers that ground water can be dangerous so he should use the toxin scanner in his survival pack before drinking. This begins what I suspect will be a long-running joke about "remember that time in Jedi Scouts when we went camping?" and it was pretty funny. He determines via the scanner that the water is heavy in arsenic and should be boiled and trapped in a tarp for safety.  They are trying to determine if they have firestarting gear when Apprentice Who's Scoundrel draws his blaster pistol and shoots some rags they have gathered, pointing out the obvious. Late in the day a sandstorm blows in and they decide to wait it out inside the well dome. Once it's over they head for the mountains, making occasional Survival checks and Perception checks to navigate to rock outcroppings and rough patches as they travel, seeking shelter and signs of civillization.

On Day 2 they hear the sound of a vehicle in the distance and hunker down in a convenient rock formation (Stealth checks), realizing that they have made no effort to cover their tracks as they travel. A skiff approaches from the way they have come, back towards the crash site, likely following their tracks. It's pretty high up but three figures peer over the side and it bears an unfamiliar insignia, a circle of red stars. Uncertain as to whether it's friend or foe, Apprentice Blaster's Jedi stands up, hands clear, and hails them. They hear a clear "yep, they're from the ship" a split second before the three open up with blaster rifles. Annoyed at the response, frustrated by the 50 meter gap (no lightsaber throws or force leaps here), and tired of traveling by foot, he yells out "try not to hurt the vehicle", pulls out a blaster pistol, and returns fire, frying one of the presumed pirates. Apprentice Red tries to focus on the force but can't quite pull it together, but the Rodian drops another hostile in one shot, staying down in the rocks for cover. At this point the remaining shooter calls out "go go get us out of here" to the unseen pilot and the skiff streaks away over the desert. Since it headed towards the mountains the trio decides they must be headed in the right direction. They are very disappointed that they did not acquire the skiff and decide their best chance to get a vehicle is to leave their tracks visible to try and lure in pirates or scroungers. Leaving VERY OBVIOUS tracks they continue walking towards the mountains, being even more careful to look for shelter as they go and especially as they end their marches each day.

Day 3 is largely uneventful until they spot something moving towards them under the sand (described to them as looking like Bugs Bunny when he travels underground). Blaster and Who pull guns while Red charges towards it. As it closes the last few meters, a "fin" pops up out of the sand and then a whole bunch of teeth are suddenly headed for the impetuous Jedi. Blaster and Who open up on it and wound the thing but it clamps down on Red's leg and we learn about the concept of the Damage Threshold in Saga Edition. Wounded pretty seriously, Jedi Red manages to concentrate long enough to force blast the thing off of his leg and onto its back where it expires from the massive trauma inflicted. Dubbing it a "Sand Shark", they study the beast as the Scoundrel Treats the Injury with a medpack.

Unshaken by the attacks on Day 2 and Day 3, the party continues on Day 4. Stopped for a rest they suddenly see plume of dust rising up behind them. A couple of dozen riders crest a dune within view and pause. Five of them break off and approach closer, with one of them finally stopping the dinosaur like beast he rides, laying down his weapons, and approaching with tentacles out and making sounds the heroes do not understand. Jedi Red reaches out with the force to make contact and to his surprise is contacted back! Jedi Blaster joins in and soon everyone is sharing thoughts of peaceful intent, danger in the desert, and the need to head for more friendly countryside. The  octopus-like creatures are called the Ul-Mor and offer aid to the trio if they agree to join the tribe - this is a tribal law thing. They do and are soon following along on borrowed Lopers, riding across the desert. The Ul-More mention an underground shortcut to their homelands and a ritual of manhood needed to become full members of the tribe but the team is just happy to be headed out of the desert among friendly folk. 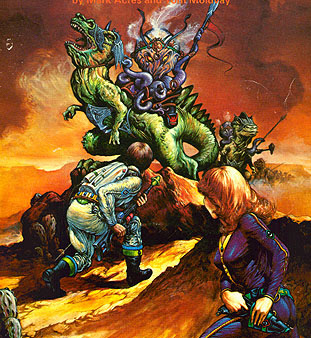 DM Notes:
It was good to dust off the rulebooks and campaign notes for this one. There was time spent at the beginning refamiliarizing with characters and rules and filling in any blank spots on the character sheets (except for name, apparently) and recalling the overall situation.

Star Frontiers has a device called a Toxy-Rad gauge that detects poisons. I'm not sure if Star Wars does or not but I included it because it made sense. That was more fun with poison than I've had in a long time. "Jedi Scouts" or "Padawan Scouts" - it was funny in the room, and the firestarter question was funny too.

The patrolling pirate encounter in the original is just supposed to be a dramatic thing to let the players know the pirates are active on the planet. That seemed like a letdown too so I turned it into a combat encounter. There wasn't much chance they were going to get the skiff but a gunfight beats a simple flyby any day. The pirates in the original are the "Star Devils". This led me to a bit of a crisis - would Star Wars have a "Devil" reference? Trek does, but Trek is Now + 300 years. Star Wars has nothing to do with the real world, history, or religion, so I don't think it would, so I changed it on the fly. It caught me off guard but it's kind of important for giving the bad guys an identity.

The Sand Shark - what it's called in the original module - is just a reskinned massif stat-wise, which I described as a cross between a shark and an alligator. Both of these outdoor combats helped make the Jedi players aware that while sabers and force powers are good indoors, some of them have serious limitations in a wide-open outdoor environment and that 30 meters is not nearly as long there as it might seem on a gridded map. Damage Threshold is an alternate axis of damage, separate from hit points, that inflicts a -1 to -5 on actions, depending on severity. Lots of damage at once, poison, fatigue, radiation, and certain weapons can send one down the condition track, eventually causing unconsciousness. It's a nice blend of simplicity and effectiveness and gives the game an alternative to hit point damage for showing effects.

The Ul-Mor encounter went pretty well with Use the Force checks and diplomacy and actual role-playing all combinning nicely. There is some curiousity about exactly how they get inducted into the tribe but they're willing to wait and see. They all thought the idea of octopus-people riding dinosaurs was kind of cool and I will agree that it's not something you see everyday and that it's not really out of place in a Star Wars game.

The total laughing breakdown of the game came when I was describing the desert and one of them thought I said "Trampoline" instead of Tattooine right after someone else had made a comment about force-hopping across the desert and this rolled into jokes about the "wide, flat, low-gravity desert world of Trampoleen" that had us all laughing our heads off. It's pretty good when they can make me lose my focus with a sustained funny, so this run was an all-around win.
Posted by Blacksteel at 12:00 PM

Sounds like a pretty fun game- with a pretty fine campaign setting too.

Well it's a little easier to see the background now that I've fixed the links...beyond that I do have high hopes for it.