One Small Rule Tweak for 4E 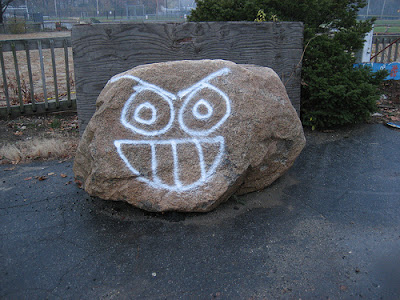 Besides limiting races and maybe some classes I really haven't felt the need to mess with 4E all that much mechanics-wise. The Rules Compendium formalized the "Monster Knowledge Check" which is an interesting way to integrate what you know into a combat situation. It also included skill check difficulties by level (rated in Easy, Moderate, and Hard), which allows us to connect monster level to how much someone is likely to know practical information about it without needing a separate subsystem. I tweaked the details a little bit and it has proven to be a popular option in our games.


< Easy: you know nothing. Should you really be fighting this thing?
=> Easy: You know the Name, Origin, Type, and Keywords
=> Moderate: You know the four Defenses of the creature, Resistance (if any), and Vulnerability (if any)
=> Hard: You know the creature's Attacks and any other capabilities like rage, teleports or heals
Now some of this is tempered by common sense - everybody knows Red Dragons are resistant to fire, and if the Orc in fron of you has a bow he's probably got the ability to hit you at range. ALso, if you've fought the creature before and remember it, that's a freebie.If you want more details and the numbers again, roll again. If you're spending an extended time fighting similar opponents (Cough! Revenge of the Giants! Cough!) then I'm not going to make you roll to know the AC of a Hill Giant - you probably already know it anyway.
I use this idea too, although they're hand-written as needed rather than printed up in advance.
Anyway, the Moderate and Hard results up there are my only real changes. No, I don't tell my players their target numbers in combat, and yes I roll behind a screen so they don't know if that 20 point hit is a good roll on a d10+10 attack or a bad roll on a 4d12 attack. It makes things a little less crunchy, a little more mysterious, and gives them a reason to use those knowledge skills at times.
Posted by Blacksteel at 12:00 PM