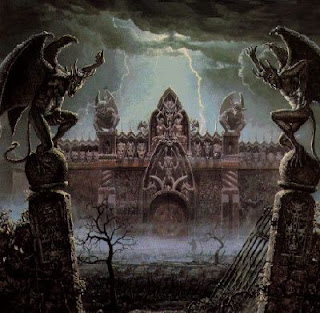 I mentioned earlier this week that I was thinking about running Hommlet and TOEE as my Second Great Low Level 4E Campaign. I do see some potential problems in doing so and thought I would share. Before I get into the problems let's look at one positive: The original is intended to take chaacters from levels 1 to 8. For a complete Heroic Tier camapign I only need to expand this to levels 1-10. That shouldn't be difficult. Another plus is that the entire adventure is divided into discreet zones:

Now depending on how I break those down we have plenty of material for 10 levels of adventuring. I don't really want Hommlet to be an adventure site as I prefer it to be a home base area and source of information. Maybe split a levels worth of encounters between it and Nulb rated about 2nd or 3rd as I see it as being part of the same lower end investigation as the Moathouse.

So Hommlet, Nulb, and the Moathouse, spiced up by some wilderness encounters here and there should end with the party at 4th. From here they would investigate the temple itself starting with the upper works and working down into the dungeon levels. I'm not sure I want to delve too deeply into the elemental nodes as combat encounters but they might fit in as a skill challenge for each one that leads up to a final encounter with the powers behind the temple. Assuming that goes well for them they would end at about 11th level, ready for Paragon and to go Against the Giants.

The biggest complaint I remember from the original is that the dungeon levels of the Temple turn into a grind with hordes of bad guys and not a lot of options besides powering through them. There was some chance for deception by using different colored factional robes but most groups ignored this and just plowed ahead. Pulling back to rest could be tricky, depending on the DM, as scouts from the still-inhabited lower levels investigated the carnage that was happening above them. A good DM would have a dynamic back-and -forth with raids and things but some just had the rest of the temples inhabitants sitting in their rooms waiting for the slaughter. I would like to avoid all of these in a new game.

Avoiding grind is tricky as one of the complaints about 4E is that it tends to grind on during long fights. It's a different issue than repetitive encounter design grind but let's address them both. The fight grind I have not noticed as almost all of our fights in the ongoing campaign have been less than 10 rounds and that seems to be a good threshold to watch. A starting chracter will have around 5 powers between at-wills, encounters, and daillies so they can go 5 rounds without repeating themselves if things go well, and the number of powers goes up every level. Encounter grind can be avoided by mixing up the opponents and keeping the terrain varied as well - not every fight has to be in the 20'x30' rectangular room with 6 cult fighters in chain wielding longsword and shield. The minion/leader/elite rules and the various templates will be very useful here too. Setting up some skill challenges to get "in" with some of the important NPC's in each faction could liven things up too and promote a more interactive game than forcing every interaction into an exchange of insults before swords are drawn. Being able to play the Earth temple against the Water temple should help entertain some of the players as much as the combat will.

I'm still not sure how to handle the big powers that can appear at the end of the adventure. I will probably write them up and hope I don't need them. I can see Zuggtmoy being a unique solo like a weaker version of the lvl 30+ epics we see n the MM's like Orcus, Demogorgon, Lolth, etc. I could tie the challeneges in the elemental nodes to her description and have success or failure enable or disable certain powers or maybe even her actual level, tying the power of their final foe directly to their results in those challenges.

The only other issue I could see is the epic feel of the original temple - that grind was present because there were a lot of enemies to subdue. With 4E's 10 encounters per level system, will it feel as "big"? I admit to seeing some temptation to make it double-sized and have the whole campaign cover levels 1-20, with the lower levels of the temple being horrific 20-encounter maps of serious nastiness and making Zug the first epic opponent to fall to the party as they wrap up at level 20/21. I think that this would run a large risk of grind/overkill/hommlett fatigue by the time it was over. Plus it doesn't leave much room for the Giants and the D-series followups.
Posted by Blacksteel at 7:00 PM

IMO, Zuggtmoy is ripe for being reduced in level to represent her simply being an aspect - and a bound one at that. Perhaps she could even be the final battle to end the heroic tier? If so, a solo controller (?) of 11th- or 12th-level might be the way to go.

I hadn't realized I've been thinking about this for almost a year now - thanks for bringing it back up Scriv.

The Demonomicon (a book I did not have when I started plotting this out) has Queen Z as a Level 22 Solo Controller which does bring up the idea of making this a 20-level adventure, if only for a second. I still think that's too much for one small region, one "theme", and it still closes off Paragon levels for the G & D series.

I will probably start with looking over how she is affected by just shaving off 10 levels. Looking at her powers it might work alright and it at least gives me a starting point. I haven't spent a ton of time on it because it will be quite a while before she comes into play, but I should probably start penciling something in.