Return to the Ruins of Adventure - Session 24: 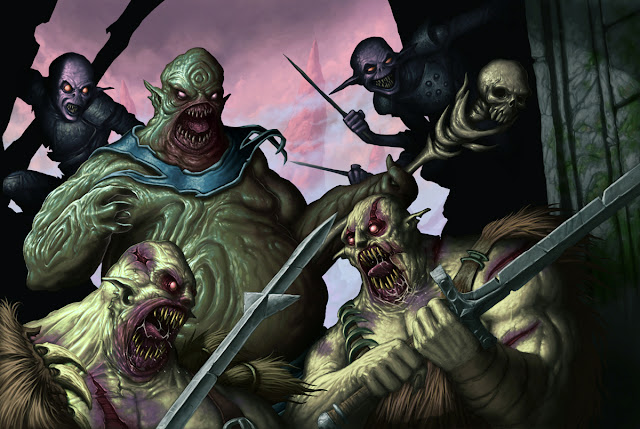 Climbing up the metal shaft our heroes discover a light some distance above. Soon enough it proves to be an opening and moving through it the party finds a series of halls and doors, all apparently metal and eerily quiet. There are no obvious handles or knobs or grips on the doors. Mikal fiddles with some carvings near one of the doors and seems to be making some progress when a low groan emerges from behind it. A faint sibilant whispering at the edge of everyone's consciousness starts up. Sensing danger, the warlock backs away as the door slides sideways into the wall and a nightmare figure emerges from within, a warped and twisted humanoid shape, a foul mockery of what might once have been human, clad in tattered remains of colored cloth. An instant later a bunch of other doors whoosh open and their grotesque inhabitants shuffle out of their rooms and into the halls. In response, weapons are drawn by untainted hands and a battle begins.

Ranged attacks fire first, dropping several of the creatures, then they slam into the one-man shield wall that is Kordan. Aided by the irresistible force that is the goliath barbarian, the highly trained immovable object that is the human shield fighter holds off the monstrosities spawned from the gods only know where. Althea, completely disgusted, fights ugly with ugly by calling up the grasp of the grave, summoning hundreds of skeletal arms to grasp and tear at the ruined things. Happy to face substantive, non-splitting foes the fighting man and the barbarian shine in this fight, giving the warlock time to bring forth the pure cleansing fire of the Nine Hells, and allowing Jovanni time to go mind-to-mind against one of the taller creatures and it's blasts of pure madness.

In the end the heroes triumph, slaying every last one of the horrid things. No one feels remorseful about this at all, even though they have never seen these kinds of creatures before - they do not appear to have any kind of natural origin. Instead they seem to be a damaged and altered from of might have been human, and it feels as though slaying them is a kindness, ending their torment.

Searching the rest of the area yields little. The rooms are all similar with metal walls and indirect light sources. There are some scrapes and gouges in some, and old bloodstains in others. There are also some piles of dust and what might once have been furniture, but it seems as warped and twisted as the former inhabitants - possibly for the same reason.

Returning to the metal shaft the team begins climbing again and soon spots another faintly lit opening. This time they are more cautious but caution avails them not as they emerge into a room with 3 floating, beaked, and tentacled brains. Who are constructing something...
Posted by Blacksteel at 12:00 PM

Thanks MT - not writing any of these for a couple of months means I have some words saved up : )

For this whole adventure I was going for a different atmosphere than a more typical dungeon crawl. I think I conveyed it well enough in play so hopefully it comes across in the descriptions too. I will also have a DM Notes section at the end of these session reports that talks about this some more.

Heh.. Reminds of Vegeta, the legendary power requires a pure heart!? I HAVE A PURE HEART! PURE EEEEEEEVILLLLL! ^_^

Hey compared to the far realm I think hellfire is comparatively pure!