A is for: The Amazing Aluminum Man! 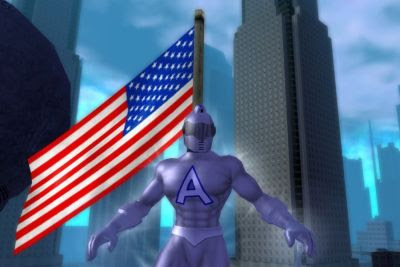 Introduction
Starting the month off right! Aluminum Man is my alter-ego in all things super. Originally created for the MMORPG City of Heroes has has crossed over into a few other aspects including tabletop RPG's, and spawned a whole family of related characters, including Aluminum Man II, Aluminum Boy, Aluminum Man Nova, Aluminum Man 2099, and Blue Aluminum Man. He is sometimes accompanied by Aluminum Girl or Aluminum Falcon, some of whom may show up here this month too. Background
AAM was my first City of Heroes character and was intended as a light riff on Iron Man who has long been my favorite Marvel character. Starting with "Guy in Suit" I eventually decided it was more complicated than the typical rich guy building a suit scenario. Here is the more complicated (and less funny) origin story I wrote up a few years ago:

"I first realized I was different when as a child I stuck my finger into an electrical outlet. Now many children do this and it is typically a painful experience but it wasn't for me. Instead I felt the electricity flowing into me and through my body and I found that I could direct it to a given point on my body. As I secretly practiced my newfound talent I learned to perform tricks like lighting up a light bulb held in my hand or zapping the cat with a minor shock. Being a child I merely thought of of my ability as a kind of trick or odd talent and nothing more."


"As I grew up my talent seemed like more of a parlor trick than any kind of truly useful ability. If your car battery died, I could get it started. If your cellphone ran out, I could power it up to make a call. It was occasionally handy but hardly life changing."

"One day in school we learned a little about electricity and circuits and conductors and this started some wheels turning in my young head. Later that day while climbing on some monkey bars I tried to shock a buddy using the metal of the bars as a conduit. It was a major change for me as I realized that not only could I direct energy through the bars, I could also feel energy in the air around the bars and I could draw it into myself through them, like an antenna. Realizing that metal amplified my talent in a pretty incredible way, I began to wonder if I could do more with it."

"Then one day I saw footage of Destroyer, one of the early battlesuit heroes, in action against Viper and everything clicked into place. I could build a suit of metal which would provide protection and enhance my powers - I could become a super hero."


"I began experimenting with various metals to determine what would give me the most power. Aluminum was lightweight and a fine conductor, so I decided to use it for the internal lining of the suit as well as some external emission points. It would also form some fixed and some retractable antennas and waveguides. For protection, most of the suit though would need to be made of one of those super-expensive exotic metals like adamantium or vibranium. Wow that stuff is expensive! I wasn't independently wealthy so I wasn't sure how I was going to afford that, so I decided to build a prototype suit completely from aluminum and use it to demonstrate my abilities in hopes of finding funding to build a real suit. As you may have guessed from my name this did not go entirely according to plan."


"I collected several thousand aluminum beverage cans, cleaned them, and began melting them down in my workshop. I made molds of my body. I sculpted foam rubber for the joints of my new suit. After months of work, everything was finally ready and one night I donned my suit for the first time."

"I could feel energy moving through space all around me - in the air, in the power lines and buildings I could see, and and even in the underground conduits beneath my feet. The suit put a much larger amount of metal in direct contact with my skin than I had ever tried before, and I was exponentially more aware of the energy around me. That should have been a warning to me."

"I found my newly amplified abilities allowed me to move against the earth's magnetic field -  I could hover in mid air with some concentration. As I did this I saw a thug attempting to steal a car and decided to see if I could project a shock, enough to dissuade him from his thievery. I opened my self up completely, thinking it would take a massive effort to project a spark that distance, and the world exploded."

"It was easier to project with the new suit than I had anticipated. I unleashed a torrent of energy and I couldn't shut it off - I was like a switch stuck in an open position. The energy poured into me, through me, and shot out from my outstretched hand. My target had been blown into the air but he did survive and he quickly ran off. The car he had been attempting to steal was melting into a puddle as the pavement beneath it began to boil. I could see my suit glowing a bright blue-white. I felt the rubber joints hiss away into vapor. I felt the metal of the suit begin to liquefy and run and I couldn't stop it. Somehow though, I was not feeling any pain. I felt strange, light, alive, and out of control but I was exuberant with the power I felt running through my body, laughing maniacally until I passed out."


"I awoke when I hit the ground. At some point the power had gone beyond my ability to manage and when I passed out it shut down, thank goodness. I stood up from a smoking crater, still quite disoriented and staggered home. When I looked in the mirror I realized the suit had not vaporized as I had assumed - I was still wearing it, only it had changed dramatically."

"No longer was I wearing a crude armor prototype. No, the metal had liquefied and run along the contours of my body, held to me by some strange side effect of my runaway power. In the hellish energies of my awakening, the metal had bonded to me, becoming part of my living tissue. I could move normally and I felt no heavier than I had before. In truth I thought I was unclothed I felt so free yet in the mirror I looked like a shining metal statue."

"Still adjusting to this new development I gingerly tested my powers and found them still working. Realizing my life had changed forever I quickly decided that I had to use these abilities as a force for good in the world. I fashioned a new helmet and found a way to bond it to myself and release it at will. I don't know that I need a secret identity but I decided to wait before revealing my true self. Plus it would maintain the illusion that I was a battle suited technological hero, hopefully giving me an advantage over potential enemies."

"As I began  my new career I was often identified as a robot or as something called a "Power Ranger." Fortunately a reporter soon had the courage to actually speak with me and I jokingly described myself as an aluminum man. The name stuck and with a few successful heroics I was soon known as The Amazing Aluminum Man", a name I try to live up to every single day. It's not always easy but it's the path I have chosen."


Qualities:
"Responsibilities of Power" - AAM chose to become a hero and takes his responsibility as one seriously. He cannot ignore a threat to innocent bystanders and does not like to risk the lives of others.


"Connections" - Aluminum Girl, Aluminum Man II, and Aluminum Boy.  They help out on some missions, assist under certain circumstances, and sometimes get into trouble requiring his aid in return.


Challenges:
"Can't take it off" - the suit is a permanent part of him. He can control the form it takes and can expose part of his bare skin at will, but he is never fully out of costume. This is largely a social problem, but could impact him in odd ways from day to day.


Notes:
Under the point build system he is about 57 points. If I wanted to go for an even 60 I would probably add some Life Support or some Electrical Resistance, but that would cost another point of Determination too and might not be worth it. I also gave some though to folding his invulnerability power into his Electrical Control, making it a Force Field which would make it stronger most of the time but would also mean it weakens or fails when he is stunned. He's not a Brick so I don't really need him running around ignoring anything short of Thor's hammer, so for now I like the Invulnerability 4 as a separate power, making him largely bulletproof but not a Tank.


In play he's good at helping with science problems and meets the minimum threshold for on-the-fly inventing of temporary devices. He's largely a ranged attacker, hovering at a distance and blasting foes with electrical powers or binding them with electrical cages and the like.


As for his connections, Aluminum Girl is his girlfriend/wife, Aluminum II is his son (a reluctant hero), and Aluminum Boy is his grandson (a very enthusiastic hero). Going further, Aluminum 2099 is his great-grandson doing some unauthorized time-traveling and Aluminum Falcon is his nephew who wanted to be a hero too. Going even farther afield, Nova and Blue are alternate-universe versions with powers over fire and cold, respectively.


Obviously there is some extended continuity there which really only exists in my head (as I am likely the only one who cares), but if you want to see more of it let me know and I'll work them in to this month's theme. Also let me know if there's a particular system you'd like to see them in as well. ICONS to Marvel is pretty simple, M&M shouldn't be too bad, HERO takes more time but gives some serious detail. I'm open to anything, just drop a comment if you're interested. 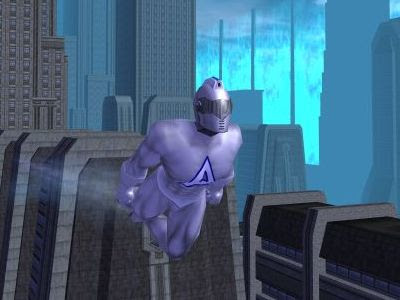 A most impressive start to the challenge, look forward to more in the coming month,

Pretty cool stuff. Do you play Mutants and Masterminds at all, I'd like to see his stats for that.

Following your blog now for the A-Z Challenge.

Tim
The Other Side

CoH FTW!! The "A" on your character's chest reminds me of a time when a few friends and I were playing the RPG Champions. I had a hero with an "A" on his chest (which I can't remember what it meant now) and my friends were making fun of my character because of it. They started goofing around and made "Alphabet Heroes": A was Ass-man, "C" was C**k-sucker Lad, "D" was Dick-man etc., Juvenile, yes I know. What made it funny was one of my friends is a good artist and was making cartoon drawings of these characters.

Thanks All! I'll see what I can do about some M&M stats Tim.

The "A" thing just seemed like part of the deal to me - I know it's fairly old school as in gold-silver-maybe bronze age but it just seemed to fit. I just see him as that kind of character.

Also a friend who can draw is a great thing to have but especially when you're playing a Supers game.