G is for: Ghostbuster

Yeah, it was a pretty big deal.

You know what it was, you know the story, you hopefully know it was good. Both my parents AND my kids like it, which tells me there's at least a moderate timeless quality to it. I loved the movie and it had some spillover effects. That Commodore 64 game was pure awesome:

I was also playing and running a fair amount of Champions at that time so naturally... 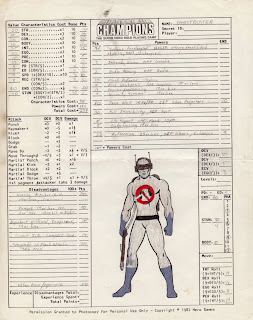 I had originally thought of making him an antagonist for some player heroes who were searching out a ghostly adviser, sort of a supernatural punisher type. I wanted him to be a grim, tough-talking hunter of spirits, probably Dirty Harry as Ghostbuster, mainly because I thought that would be funny. Instead I ended up playing him in about 3 sessions of a very short campaign. One of the bad guys in that one liked to phase through walls and to save his bacon in a fight so my powers were pretty handy. I tried to play him as the grim batman-esque type but I'm not sure how well it went over, I think it just confused people.

Looking him over he looks like a Champions II era character, mostly because of that Reflection power.  Stat-wise he's alright but that OCV/DCV of 5 is terrible - he needs some levels at the very least. Against any decent kind of supervillain he's not going to do well at all, and I'm not sure how I did anything back when except that our homemade villains were all over the place power-wise so maybe that's the key.  I would pull some of that Strength (20? Really?) and Con (also a 20 - what was I thinking?)

Looking at the disavantages, well, I can't remember who F.A.L.C.O.N. was but we were very fond of acronyms back then. The only one I remember is and organization of supervillains named LA.O.S. which stands for Law And Order Sucks. It was an organization of 3rd-rate not-too-bright bad guys (maximum intelligence was 10, which only the leader had as he didn't want anyone smarter than him trying to take over). Moving on...doesn't like to be hit OK... dependent girlfriend... secret ID... susceptible to Flash attacks? What, is he an albino or something? Not sure what was going on there, it should be a vulnerability not a susceptibility but OK.

Powers are interesting. the big flashy one is the Nuclear Accelerator and if I was doing it today I might try and work in an entangle effect as well but back then we liked to blast things. Infrared, radio, flash defense, life support...OK. FInd Weakness - that would certainly help in combat. Some skills, OK. Now it gets weird - Invisibility, Force Wall, Reflection - That's a bit of a change from the early concept. Invis helps with the Batman/Punisher thing but he appears to have stolen Iron Man's gloves at some point because he can do some interesting things there. Those look like something added in play or after being played. I vaguely remember using the force wall as a containment vessel to catch enemies as well as a defensive barrier so maybe that was part of it. Regardless I would have to clean this up in a rework today. 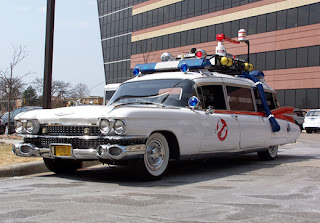 GB didn't have a vehicle although if I had used him more he might have ended up with his own version of ECTO-1 because Champions II included vehicle rules. It's a shame I never put that together.


I know there was a Ghostbusters game from West End and I have no doubt it was funny but I never owned it, read it, played it, or saw it used in play. I should probably find one on Ebay. I doubt I could get anyone to play it but the Apprentices might be strong-armed into it.

I also remember (and liked at the time) the earlier Saturday morning series with the very similar name that covered a similar theme:

It was very much a kid's show and I'm not telling anyone to go look for the DVD's or anything but the wiki is here if you want to check any fading memories of this show.
I'm not going to do an ICONS writeup here because I don't think there's much to it. Normal human stats, a blast power with bind or paralyze, and some detection abilities, at least one specialty in Occult, and there you are.

Anyway that's a fun little trip down memory lane. I'm not sure that any RPG campaign nowadays cries out for Ghostbusters (unlike, say, giant shapeshifting robots) but it could be a fun addition as a patron or source of information in a Supers campaign at least. I hesitate to think how they might fit into an Unknown Armies game or Cthulu Now but those might be fun too.

Tomorrow: A completely different topic from today.
Posted by Blacksteel at 12:00 PM

I *LOVED* the Ghostbusters game on my C=64

I love the movie, the cartoon and the RPG. Merged it with InSpectres FTW!