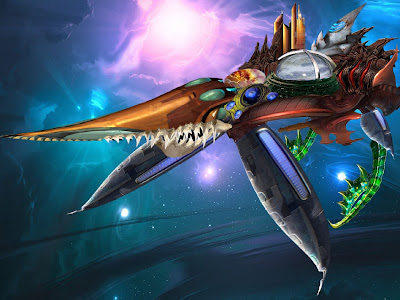 I've been working on getting my campaign binders organized this week and I've ended up with 5 major campaign ideas I would like to try in 4th edition D&D. I like the new ones enough to go ahead and start campaign binders for them even though it will probably be awhile before they see action. I like having a physical thing to keep my ideas in and I probably do over-organize to a degree. The upside is that I have some material ready to go when the opportunity arises.

First up we have "Return to the Ruins of Adventure" - it's up and running and going well. I will say it's inspired by the old gold box game but it's not a direct conversion by any means.The PC's explore a ruined city discovering all kinds of problems and threats, both ancient and new. It's set in the 4E Forgotten Realms and we started at 1st level.

The new second 4E campaign is 'The Guardians of the Vale" which is my grand tour of WOTC's published 4E adventures. This is also set in the Realms and is also starting at 1st level with new characters. This will tap into a lot of the Nentir Vale stuff that's out and is coming out in the next year. One reason I'm doing it is that I really like the "touchstone" aspect of published adventures like Keep on the Borderlands or Against the Giants back in the old days and I think it's important to have some of those shared experiences with other players down the road. The players are currently all family members - lots of schedule flexibility that way - but there may be some guest appearances from the Phlan campaign above.

The third idea is "Lost Empires" set in Greyhawk's lost prehistory between the fall of the big human, dragonborn, and tiefling empires and the rise of the Suel and Baklunish nations. Placement-wise I'm ripping off the Hyborian Age and I'm totally happy with that. I have more about this concept here and this is the one that would likely end up as a pure sandbox campaign similar to the West Marches. Originally I had thought of using the published stuff here but I want this to be my own thing. It would use the default 4E deities and cosmology as the now state but the expectation is that the players would aim to make some changes. This might be a good place to work in some 1E module conversions too if I go that route.

Idea number four is the "Age of Heroes" campaign set in ancient Greece. I wrote some about it in an earlier post but the basic idea was to make some changes to baseline 4E races and deities and then just roll. It's more of a flavor change than anything else but it might make a decent sandbox too. Heroic = working around one Greek city, Paragon = working around Greece as a whole, possibly uniting the cities in a league, and Epic = dealing with the gods and their interference in mortal affairs ala the Trojan War.I would run it with less planar travel at paragon and epic, more focus on changing the world the characters live in.

Idea five is the newest one and I'm still working through some of the details. After reading through the Manual of the Planes, a short scan of The Plane Below, and reading through some of the published paragon and epic adventures a certain theme began to coalesce in my head. Call it..."Plane Trek". I would start the campaign at 11th level - PC's can be from any campaign world, any race, any class, etc. They are heroes on their home world, at least in their village/city/kingdom. They are then recruited into an organization based out of Sigil (most likely) that explores the planes and deals with threats that involve more than just one world - the Big Threats. The organization sends them out on planar ships to explore, map, and deal with these kinds of threats. I'm not sure how formal to make the organization - more rigid command structure and ranks or more loose almost like a pirate crew. If I could keep it somewhat episodic - this week the ship has detected an astral dragon heading for a githyanki fortress and is moving in to investigate - then it would make it very easy to drop in onetime players in a sort of sandbox, sort of mission-based delve format. At paragon they would be the lesser officers on the ship but once they hit epic they would be the "bridge crew" and in charge of their own travels in a big way.

It's definitely not a traditional D&D campaign but I can see some potential in it and some value in a change of pace if everyone gets tired of playing knights & wizards & castles & dragons after a few years. I won't be running this in 2010 and maybe not next year either but I will definitely be making notes and stealing ideas to stick in the campaign binder for when I do.

This is pretty typical of what happens when I feel like I'm getting a handle on a system's mechanics - all of a sudden the campaign ideas start to sprout and I end up with pages of notes on stuff I will likely never run - not because it's not good, but because I will never have enough time. When it comes to actually running a campaign it takes a fair amount of time and there are only so many free evenings or afternoons in the week. For most of us, sustaining one ongoing campaign is a major feat. keeping two or more going is very difficult. I have managed it in the past and had the most success when the second campaign was run as a "limited campaign" with a defined start, a set mission (maybe you're just trying to complete a particular module), and a definite end. Doing it this way the second campaign will do alright but will run in short bursts rather than trying to sustain a long open-ended schedule commitment. For me, now that the kids are reaching an age where I can cheat and play with them whenever time allows I can call that my second campaign.

This leads to another little piece of advice for anyone reading this: I used to come up with some cool ideas and think "I'll use that in my next campaign because it will fit much better." DON'T DO THIS! If you have a campaign running now and come up with a cool idea use it now! Don't hoard it! You may never run that next campaign or the system may be different or you may forget it or lose your notes - go ahead and find a way to make it work in this one. You will likely think of ways to make it even better for that "next" campaign and you will have the advantage of having tried it out. Go ahead and drop an asteroid on Waterdeep. Go ahead and let the PC's see Skywalker die at the hands of the Emperor. Destroying canon in a big way at the start of your campaign is very liberating for players - they realize that while the world is still familiar, things are up for grabs, and they may finally have a chance to do all the things they want to do.I may take my own advice and have my PC's join an inter-planar federation of explorers and problem solvers once they have helped save Phlan - I'm not sure yet and it will take us awhile to get there. Heck maybe my Vale Guardians will decide that Fallcrest can go to hell figuratively while they go to it literally and they sign up for ship duty. Either way they will have options down the road and I will be gathering material for the next cool thing even as I run them through the right now cool thing.
Posted by Blacksteel at 1:52 PM